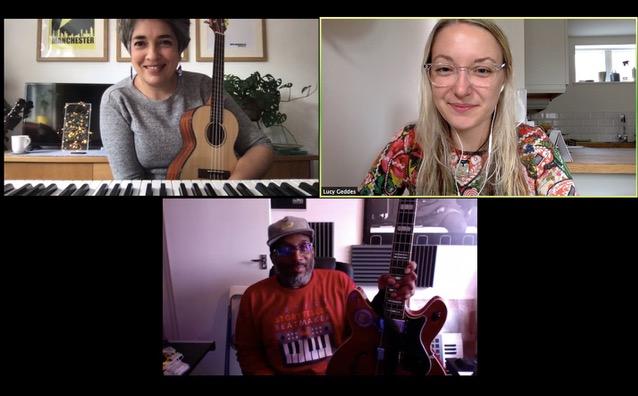 12 months ago, Lucy Geddes and Amina Hussain set up String of Hearts, a community arts organisation which connects older adults through music-making in their local area of Trafford, Greater Manchester. During Covid-19 they developed a music phone call initiative to support people without internet access, which is now being socially prescribed by GP practices and local organisations. Below they share their inspiration and learning behind the initiative.

The Music Hotline was created with three things in mind: connection, creativity and self-expression. Born out of barriers to access creative activities without the internet, the hotline enables person-centred musical engagement using only the telephone.

Data captured by Ofcom shows that over a third of people aged over 65 don’t use the internet, which is causing a digital divide as more and more services are delivered online. This is due to a multitude of reasons, from not having a device or WIFI, to nervousness about scams, to keeping up with new technologies. These reasons were reflected in the conversations we had with older adults in our local area and with social prescribing link workers.

In the first few months of lockdown, link workers also told us their numbers of patients with high levels of anxiety or depression had significantly increased, and that there was a lack of creative activities for patients to attend that did not involve the internet. Other patients also faced continued challenges due to being unpaid carers, recently bereaved, or living on their own, with limited support mechanisms.

We responded to these challenges by setting up the Music Hotline: friendly phone calls between an older adult and a professional musician. During the calls, individuals actively take part in music-making in ways that suit them. This includes playing or singing with the musician, having musical conversations and creating new pieces of music based on their personal interests. Our musicians respond organically to each individual’s diverse taste in music, from Afrobeat to Punk to folk music. They improvise tunes in the moment and facilitate song-writing by collaborating to create poetry or lyrics with musical accompaniment.

In the first couple of calls, the musicians spend time getting to know the individual; finding out what music they like, what music has narrated aspects of their lives, and their other interests. None of us have ever met before, and whilst we don’t know what each other looks like, we are bonded by our sense of place and our shared musical interests, and over time that bond has grown into an understanding and appreciation of each individual’s story, skills and hopes for the future.

The Hotline is now being socially prescribed by link workers from GP surgeries, Community Officers from NHS Trusts and Trafford Council, and other clinical practitioners. Referrals are also being received from organisations such as Alzheimer’s Society, Henshaws and Empower You, who support people with a range of disabilities and people living with dementia. We’ve been advertising in local magazines and radio too, so that individuals can self-refer.

The beauty of the Music Hotline is its accessibility. People with sight loss are taking part, and people with hearing loss are also taking part using an amplifier to increase the sound of their telephone. People who have chronic anxiety or depression can take part in a one-to-one experience without the pressure of joining a group. They can join the call from anywhere at a time agreed with them and can put the phone down whenever they need. Our musicians are deeply sensitive to each person’s needs and wishes, whilst providing a sense of structure and motivation to maintain engagement, set goals and gently push boundaries of what someone thought they could achieve.

The people taking part in the Music Hotline are a collective of diverse, creative individuals with their own stories to tell and ideas to share. People like Paul, aged 76, who used to play the guitar and sing, and says he can’t song-write anymore. But during the phone calls he creates amazing words that depict personal stories of love and loss, and has created melodies on the guitar based on the style of music he likes. Now he is setting this melody to musical accompaniment with a String of Hearts musician.

Four months down the line, there is now a collection of beautiful poems, songs and improvisations which have been written by older adults in Trafford and Manchester. The works provide a brief insight into the lives of a group of creative, imaginative older adults, whose voices should be amplified amongst the disturbing rhetoric of ‘vulnerable’ older people in the media. In 2021, these musical creations are going to be learnt and recorded by our musicians and other String of Hearts group members and shared on local radio.

Moving forwards, there is a glimpse of hope for the future amongst this diverse group of older adults. There are still many obstacles that each individual is managing to overcome each day. But there is a renewed optimism and sense that we are all slightly less alone, that each individual is connected with someone who cares about their assets and skills, who listens to them, motivates them, and supports them to share their creativity with others. In a few months’ time, they will be supported to meet others face-to-face in small group workshops. It’s a journey that is constantly evolving every day, and we’re learning and adapting as we go. But that’s the beauty of this type of person-centred engagement. It might take many forms, but the end result is something raw and beautiful.