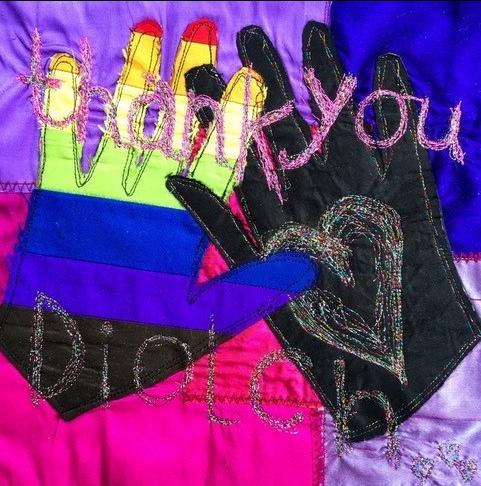 A story about the growth of a virtual community that emerged from the concept of one artist in North Wales that reached very much further afield.

In the words of artists, and group members, Helen Griffiths and Pete Leonard.

With the imposed lockdown due to Covid 19 pandemic many people were concerned about the result of the isolation on members of society.

Creating could be a great way of helping many and is recognized by healthcare professionals as a method to reduce anxiety, sadness, depression and other issues that can result from long term isolation. With lockdown and group meetings not happening in real time how could people be encouraged to be creative?

Helen Melvin, a fibre artist and maker of natural dyes from North Wales, mentioned to a few friends about starting a Facebook group. She said that it would be to encourage others to create, provide general support for participants, all with the goal of helping people cope with their isolation. Her friends thought it was an excellent idea, so she decided to do it! “John, my husband came up with Creating in the Teeth of Corona” as the name for the group said Helen “and I thought it was perfect”.  She started it on 16 March 2020.

“When I set the group up I was aware that it needed to be well run, having had experience of groups being ruined by one or just a few people pursuing their own agenda, and I wanted it to be a supportive group” said Helen. She knew she couldn’t do this alone and a few days later put out a call for some assistants. On March 22 2020, Anne Fitzgerald and Edna Leys joined Helen on the administrative team.

“I expected there to be around 50 in the group and to be mainly people from the creating groups in my area of North Wales, so I wasn’t expecting there to be too much for us to do” said Helen. By the end of the first month, membership was over 400. At the one year anniversary, membership was over 850, with more than 70 members from countries outside the UK. In addition, the membership represented 30 different arts and crafts activities; very different from most Facebook groups which are very specialized.

The group rapidly developed a unique approach to the isolation. Every day there was a good morning message from either Helen, Anne or Edna “At these we always made sure we gave the day and date, as many were losing track of time” said Helen. Members were most appreciative of these messages:

“To come down in the morning and see what other people have been creating or discovering has been a fab inspiration to do something myself”.

There was a virtual 11 am coffee morning held fortnightly on a Thursday with the good morning greeter (either Helen, Anne or Edna) hosting it. The host would post a photo of their current project with a cuppa and members responded by commenting and posting their own project photos.

”I really participated a lot in the chats and ‘coffee mornings’.  It really helped to have somewhere to show what I had been working on”.

We have Mark Jones a sheep farmer from North Wales as a member and his participation with little videos of life on the farm delighted the group. Click here to view.

“It’s helped me feel connected with the outside world; especially zoom meetings”.

Members were continually encouraged to pursue their craft (e.g. hand-spinning, painting, pottery, jewellery making) and to share with the group, thus inspiring others with their making, all with the goal of helping to reduce the isolation and loneliness.

“I feel that being part of the group has helped me keep in touch and remain (fairly) positive. The focus on good news within the posts, and the absence of negativity/adverse criticism has been really helpful”.

As 2020 progressed it became clear there would be no craft sales for 2020. The current Facebook page did not allow buying and selling but, to help the members who have small businesses, the group started a separate Facebook page to allow members to buy and sell items. The first sale was held over a weekend in July and was very well received. The second sale was a successful Christmas/holiday sale. Vendors were mainly members from the UK and most customers were from the UK due to shipping costs.

Even with the pandemic restrictions being lifted or eased in many places, members expressed a clear interest in the continuation of the page and the administration has agreed to continue it with less frequent events.

“I don’t have a clear vision on how this group should develop but, wherever it’ll go I’ll follow.”

Some good friendships have been formed through the page and a group of members who lived geographically close are planning an actual meeting in the not-too-distant future.

Clearly, Creating in the Teeth of Corona Facebook page filled a very important role for many people, not just in the UK but in other parts of the world, through a very difficult and dark time in world history.

“Thank you to admin who had the inspiration and insight to realise that there was such a huge need out here to set up the group, such a lovely and caring 'community' “.

For more information on the group search Facebook for Creating in the Teeth of Corona.

Authors Helen Griffiths and Pete Leonard are both fibre artists, Helen in the USA and Pete in England. They are grateful to Sabina Neall for assisting us with the design and layout.